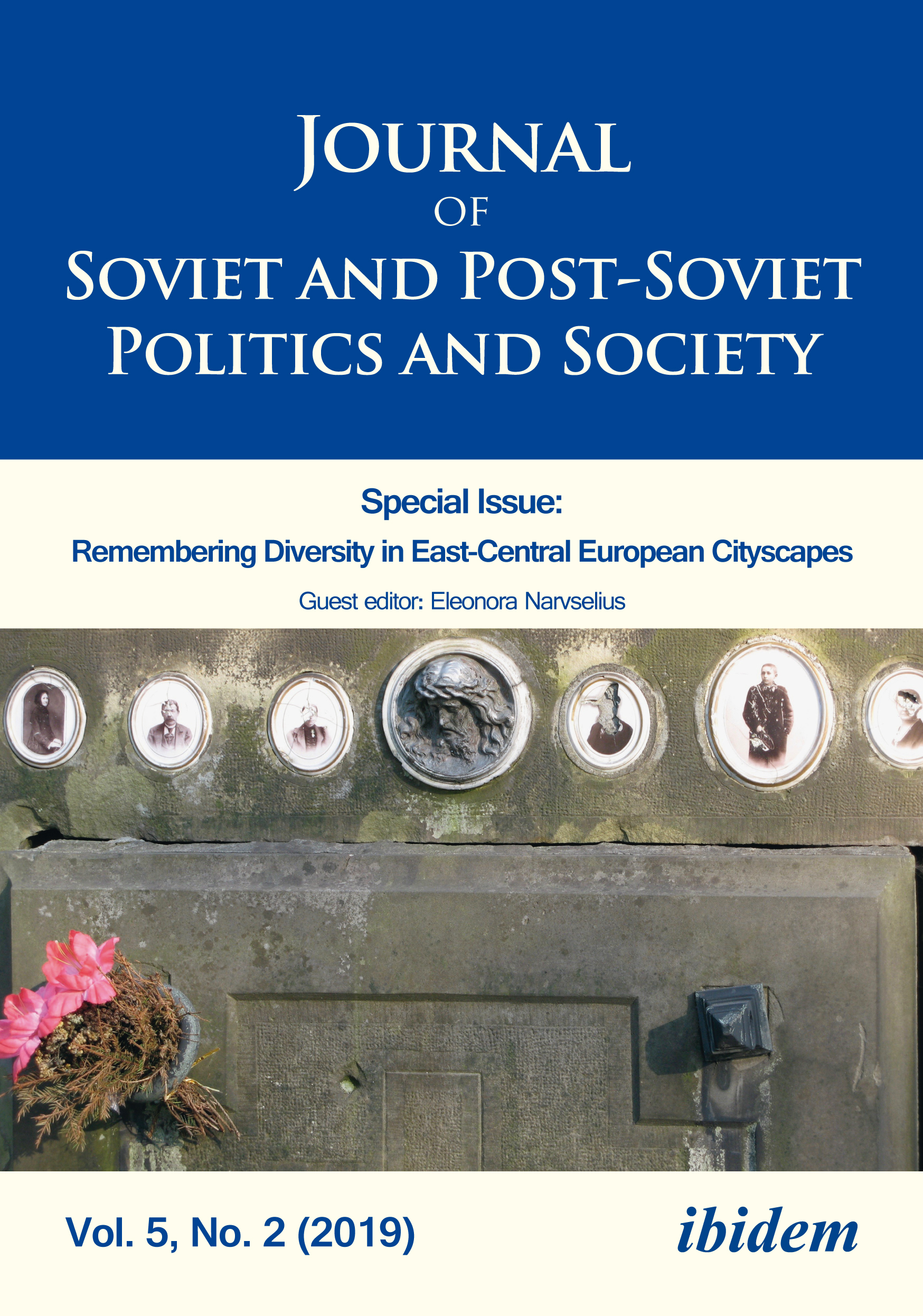 Between Anonymity and Attachment: Remembering Others in Lviv’s Pidzamche District
Natalia Otrishchenko

On the Peripheries of Memory: Tracing the History of the Old Jewish Cemetery in Wrocław’s Urban Imaginary
Juliet D. Golden and Hana Cervinkova

A Tangle of Memory: The EternitateMemorial Complex in Chişinău and History Politics in Moldova
Alexandr Voronovici

Uilleam Blacker, Memory, the City and the Legacy of World War II in East Central Europe: The Ghosts of Others

Vladlen Loginov, Vladimir Lenin: How to Become a Leader

Igor Torbakov, After Empire: Nationalist Imagination and Symbolic Politics in Russia and Eurasia in the Twentieth and Twenty-First Century

Legal Loopholes and Judicial Debates: Essays on Russia’s 2014 Annexation of Crimea and Its Consequences for International Law
Gergana Dimova

The Obligation of Non-recognition: The Case of the Annexation of Crimea
Agata Kleczkowska

The Return to Patriotic Education in Post-Soviet Russia: How, When, and Why the Russian Military Engaged in Civilian Nation Building
Håvard Bækken

Political Parties and the Institution of Membership in Ukraine
Melanie G. Mierzejewski-Voznyak

Elliot Dolan-Evans on:
Marci Shore, The Ukrainian Night: An Intimate History of Revolution

This issue features the second installment in a series
of thematic sections dedicated to the history and memory
of the Organization of Ukrainian Nationalists (OUN)
and its military arm, the Ukrainian Insurgent Army (UPA).

Special Section: Issues in the History and Memory of the OUN II

Andreas Umland and Yuliya Yurchuk:
Introduction: Essays in the Historical Interpretation of the Organization of Ukrainian Nationalists

Igor Barinov:
Allies or Collaborators? The Organization of Ukrainian Nationalists and Nazi Germany during the Occupation of Ukraine in 1941–43

Anika Walke on:
Leonid Rein, The Kings and the Pawns: Collaboration in Byelorussia during World War II

Yulia Oreshina on:
Tarik Cyril Amar, The Paradox of Ukrainian Lviv: A Borderland City between Stalinists, Nazis, and Nationalists

Olga Gontarska on:
Sander Brouwer (ed.), Contested Interpretations of the Past in Polish, Russian, and Ukrainian Film: Screen as Battlefield

Antony Kalashnikov on:
Shaun Walker, The Long Hangover: Putin’s New Russia and the Ghosts of the Past

Natalia Moussienko:
Cultural and Performative Dimensions of the Kyiv Maidan (2013–2014)

Oleksiy Krysenko:
Regional Political Regimes in Ukraine after the Euromaidan

Sergey Sukhankin:
Russian Regionalism in Action: The Case of the North-Western Federal District (1991–2017)

Oleksandr Potiekhin and Maryna Bessonova:
Ukrainian Attitudes toward the United States during the Russian Military Intervention

Victoria I. Zhuravleva:
Images of the United States in Putin’s Russia, from Obama to Trump

Roman Abramov:
New Trends in the Museumification of the Soviet Past in Russia (2008–2018)

Valentyna Kharkhun:
Museumification of the Soviet Past in the Context of Ukrainian Memory Politics

Kateryna Smagliy:
Ukraine’s Civil Society after the Euromaidan: Were Any Lessons Learned from the 2004 Orange Revolution?

Anna Arutunyan:
Agency in Russia: The Case for a Maturing Civil Society 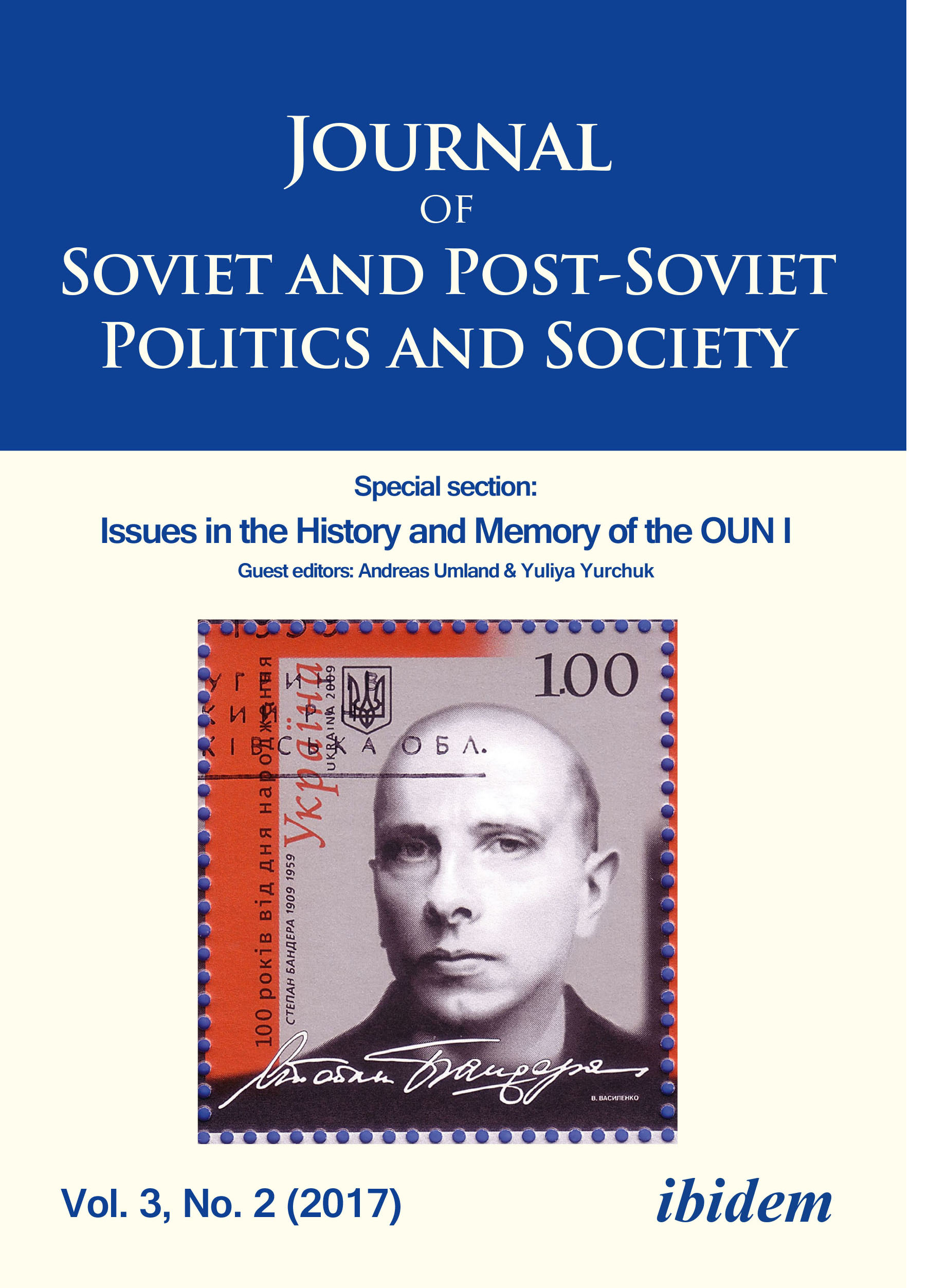 The Journal of Soviet and Post-Soviet Politics and Society (JSPPS) is a bi-annual companion journal to the Soviet and Post-Soviet Politics and Society (SPPS) book series (founded 2004 and edited by Andreas Umland, Dr. phil., PhD). Like the book series, the journal provides an interdisciplinary forum for new original research on the Soviet and post-Soviet world. The first five issues to date have explored a diverse range of topics, including: Russian media coverage of the war in Ukraine; the experiences of Soviet Afghan war veterans in transnational perspective; discourses of memory and martyrdom in Eastern Europe; gender and anti-authoritarian protest in Belarus, Russia, and Ukraine; violence in post-Soviet space; and agency in Belarusian history, politics, and society.

Special Section: Issues in the History and Memory of the OUN I

Per Anders Rudling:
The Bandera Cult in Ukraine and Canada

Yuliya Yurchuk:
The Memory of Taras Bul’ba-Borovets’: A Regional Perspective on the Formation of the Founding Myth of the UPA 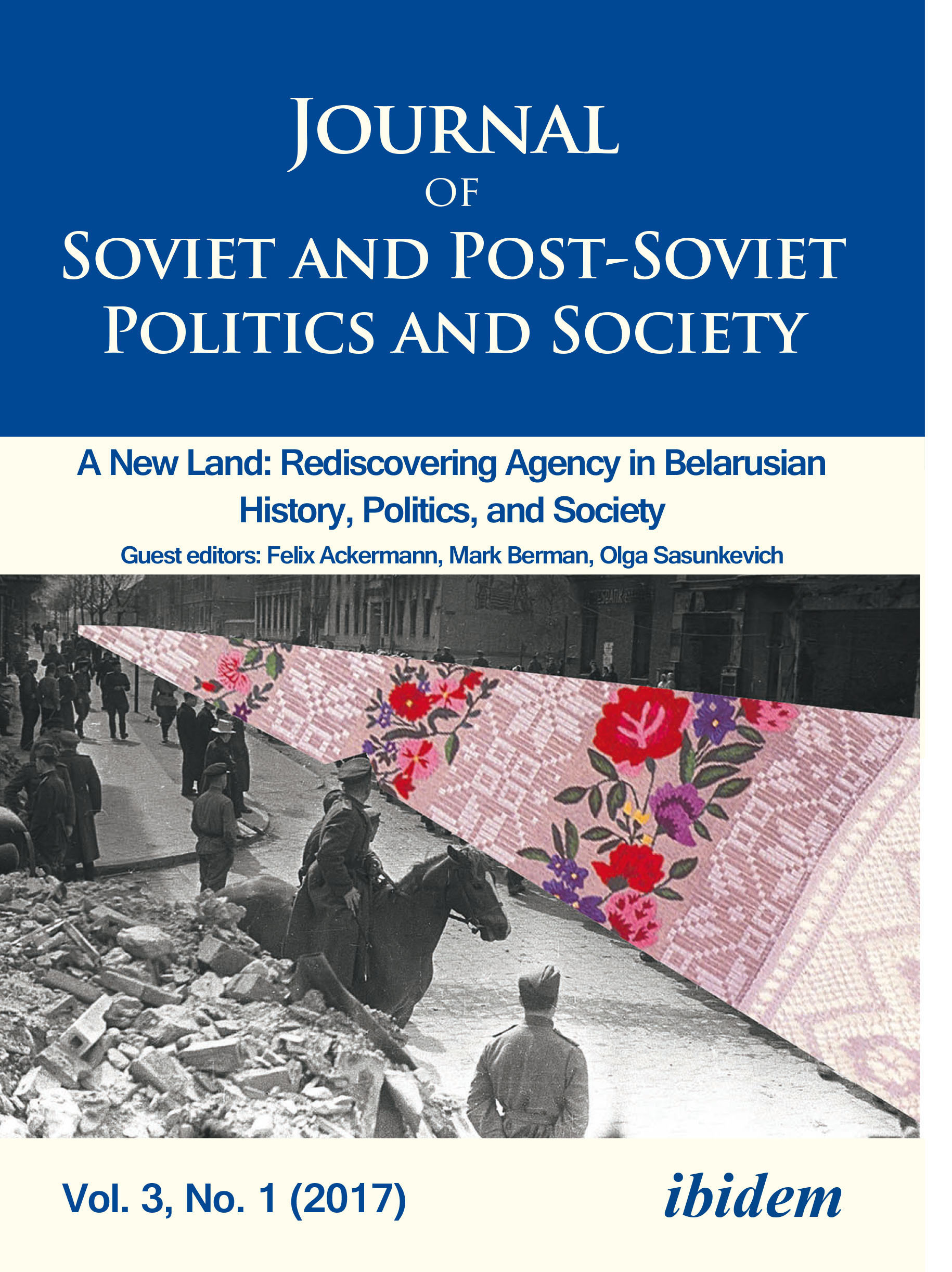 This special issue provides a forum for discussion of what Belarusian Studies are today and which new approaches and questions are needed to revitalize the field in the regional and international academic arena. The major aim of the issue is to go beyond the narratives of dictatorship and authoritarianism as well as that of a never-ending story of failed Belarusian nationalism—interpretive schemes that are frequently used for understanding Belarus in scholarly literature in Western Europe and Northern America. Bringing together ongoing research based on original empirical material from Belarusian history, politics, and society, this issue combines a discussion of the concept of autonomy/agency with its applicability to trace how individual and collective actors who define themselves as Belarusian—or otherwise— have manifested their agendas in various practices in spite of and in reaction to state pressure.
This issue offers new approaches for interpreting Belarusian society as a dynamically changing set of agencies. In doing so, it attempts to overcome a tradition of locating present Belarusian political and social dilemmas in its socialist past.

Felix Ackermann, Mark Berman and Olga Sasunkevich:
In Search of Agency: Examining Belarusian Society from Below

Alena Minchenia:
Behind the “Failed Revolution”: Becoming Patriots, or the Work
of Shame in Protesting Discourse in Belarus

Elena Gapova:
The Politics of the Belarusian Self: Performing Truth,
Converting in Public 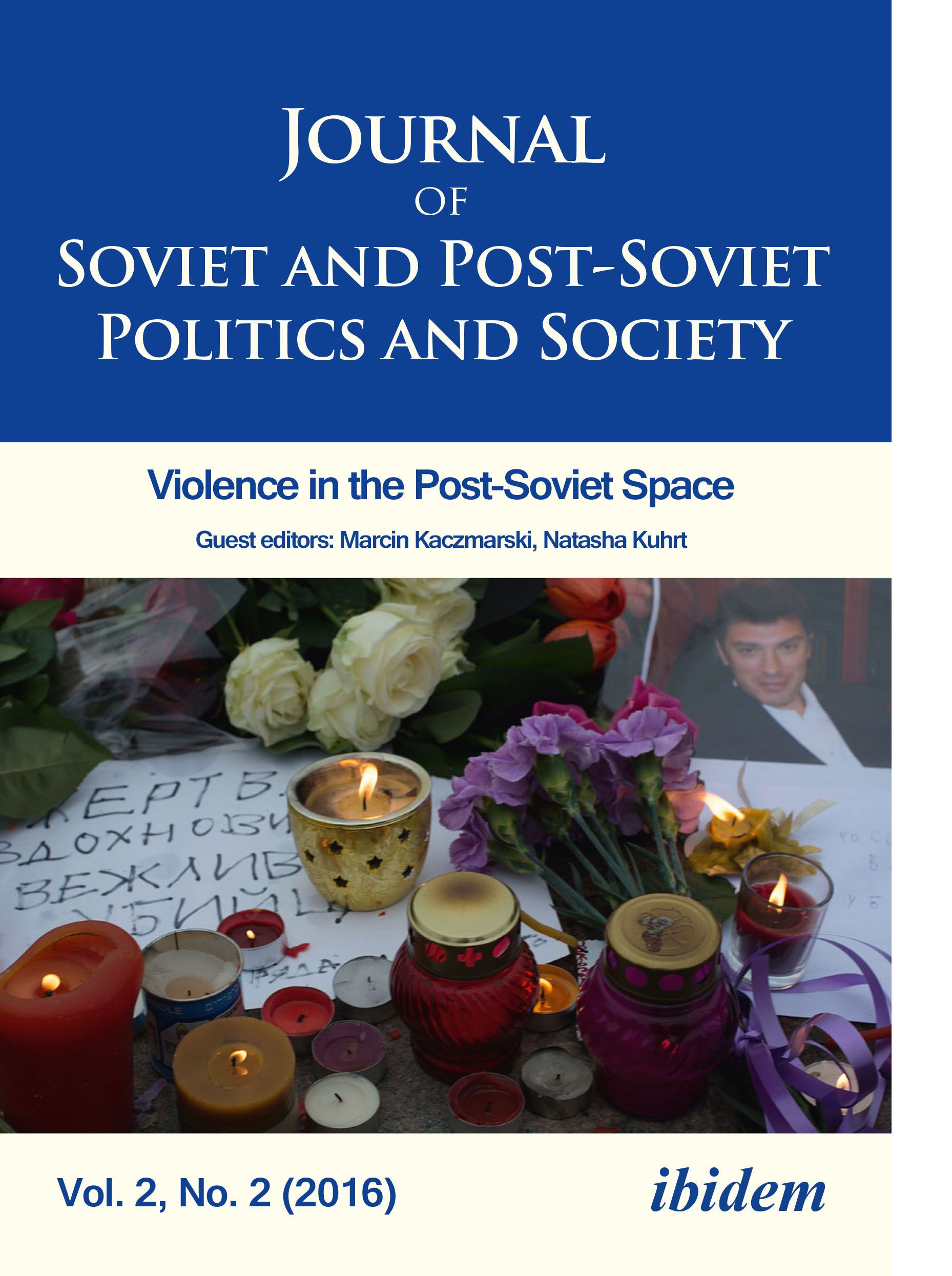 This special issue deals with the phenomenon of violence in the post-Soviet space. The central preoccupation is to examine both political and legal discourses and practices of internal and external violence, broadly conceived, in this space. Simultaneously the special issue aspires to situate these discourses and practices in the broader literature on political violence and ethnic and separatist conflict, and to examine these from political, legal, and security studies perspectives.
The issue approaches the problem of violence in the post-Soviet space from three perspectives: The international-structural, inter-state, and domestic-political. The contributors focus on structural sources of violence: The relevance of the self-determination principle, the role of democratization, and the relationship between violent behavior inside and outside the state. They also analyze the role of the Russian Federation in generating, perpetuating, and mitigating political violence. Finally, they adopt a bottom-up approach, exploring how non-state actors contribute to political violence. 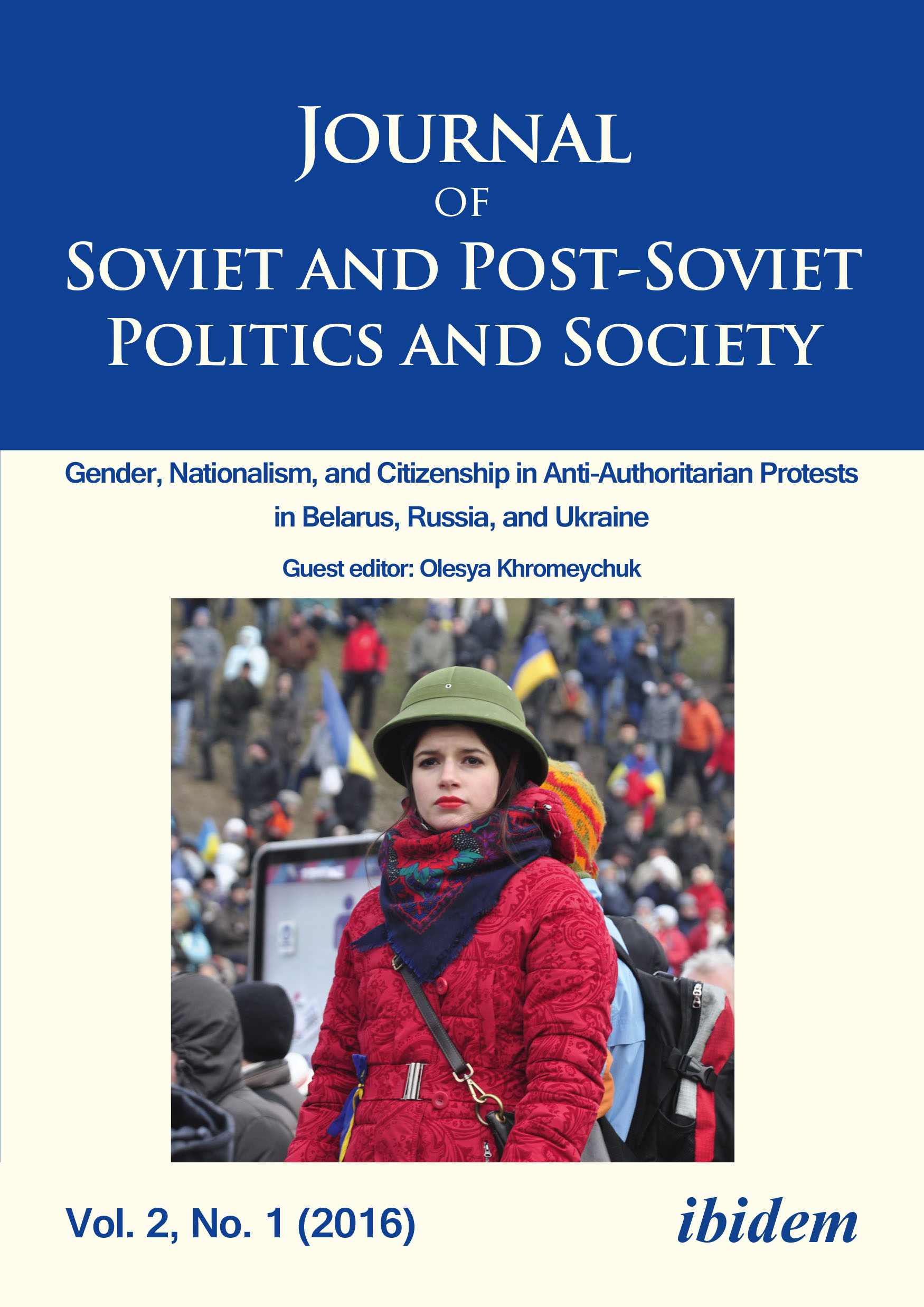 This special issue focuses on gender dynamics in protest movements that occur in patriarchal, authoritarian and semi-authoritarian societies. Themes covered include the place of feminist and gender equality movements in democratically restricted environments, intersections between feminism and nationalism, the relationship between nationality and sexuality, the question of political agency of non-mainstream groups in the context of protest activity, and the dilemmas of conducting qualitative research while participating in a protest.

The journal features contributions by scholars, gender equality activists, and artists, and provides a wide-ranging discussion of recent and ongoing protest movements in Belarus, Russia, and Ukraine.

Articles
Olesya Khromeychuk:
Negotiating Protest Spaces on the Maidan: a Gender Perspective
Tamara Martsenyuk:
Sexuality and Revolution in Post-Soviet Ukraine: Human Rights for the LGBT Community in the Euromaidan Protests of 2013-2014
Darya Malyutina:
Ethical Concerns in Activist Ethnography: the Case of Ukrainian Protest Activism in London and a Russian Female Researcher
Evgenia Ivanova:
Between Being Witty and Being Pretty: Paradoxes of Female Political Participation in Post-Soviet Eastern Europe
Olenka Dmytryk:
“I’m a Feminist, Therefore…”: the Art of Gender and Sexual Dissent in 2010s Ukraine and Russia
Nadia Plungian:
Feminist Art in Russia in 2014–15: the Problem of the “Turn to the Right” 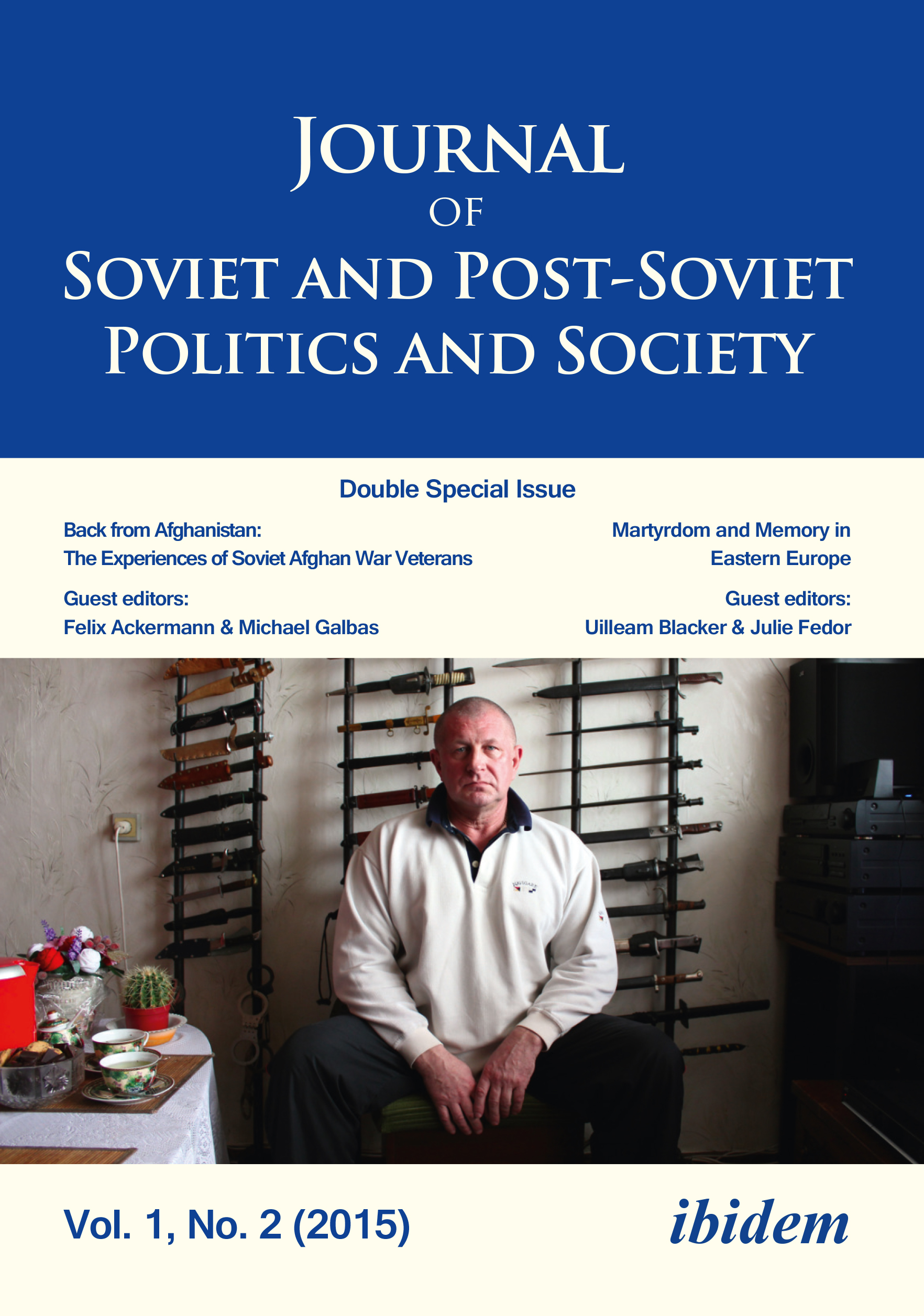 This double special issue investigates the experiences of Soviet Afghan veterans and the ongoing impact of the Soviet-Afghan war (1979-89); and the new and reconstituted narratives of martyrdom that have been emerging in connection with 20th-century history and memory in the post-socialist world.

SPECIAL ISSUE: BACK FROM AFGHANISTAN

Felix Ackermann and Michael Galbas:
Back from Afghanistan: Experiences of Soviet Afghan War Veterans in Transnational Perspective
Yaacov Ro'i:
The Varied Reintegration of Afghan War Veterans in Their Home Society
Markus Göransson:
A Fragile Movement: Afghan War Veterans and the Soviet Collapse in Tajikistan, 1979–92
Michael Galbas:
“Our Pain and Our Glory”: Strategies of Legitimization and Functionalization of the Soviet–Afghan War in the Russian Federation
Iryna Sklokina:
Veterans of the Soviet–Afghan War and the Ukrainian Nation-Building Project: From Perestroika to the Maidan and the War in the Donbas
Jan C. Behrends:
Post-Soviet Legacies of Afghanistan: A Comparative Perspective
Anna Reich:
Faces of the Lithuanian Afghanai

Jay Winter:
War and Martyrdom in the Twentieth Century and After
Uilleam Blacker:
Martyrdom, Spectacle, and Public Space in Ukraine: Ukraine’s National Martyrology from Shevchenko to the Maidan
Sander Brouwer:
The Eternal Martyr: Karen Shakhnazarov’s White Tiger as a
Cinematic Reflection on Russian Martyrdom
Maria Mälksoo:
In Search of a Modern Mnemonic Narrative of Communism: Russia’s Mnemopolitical Mimesis during the Medvedev Presidency
Iryna Starovoyt:
Holodomor, Amnesia, and Memory-(Re)Making in Post-War Ukrainian Literature and Film
Simon Lewis:
Overcoming Hegemonic Martyrdom: The Afterlife of Khatyn in Belarusian Memory 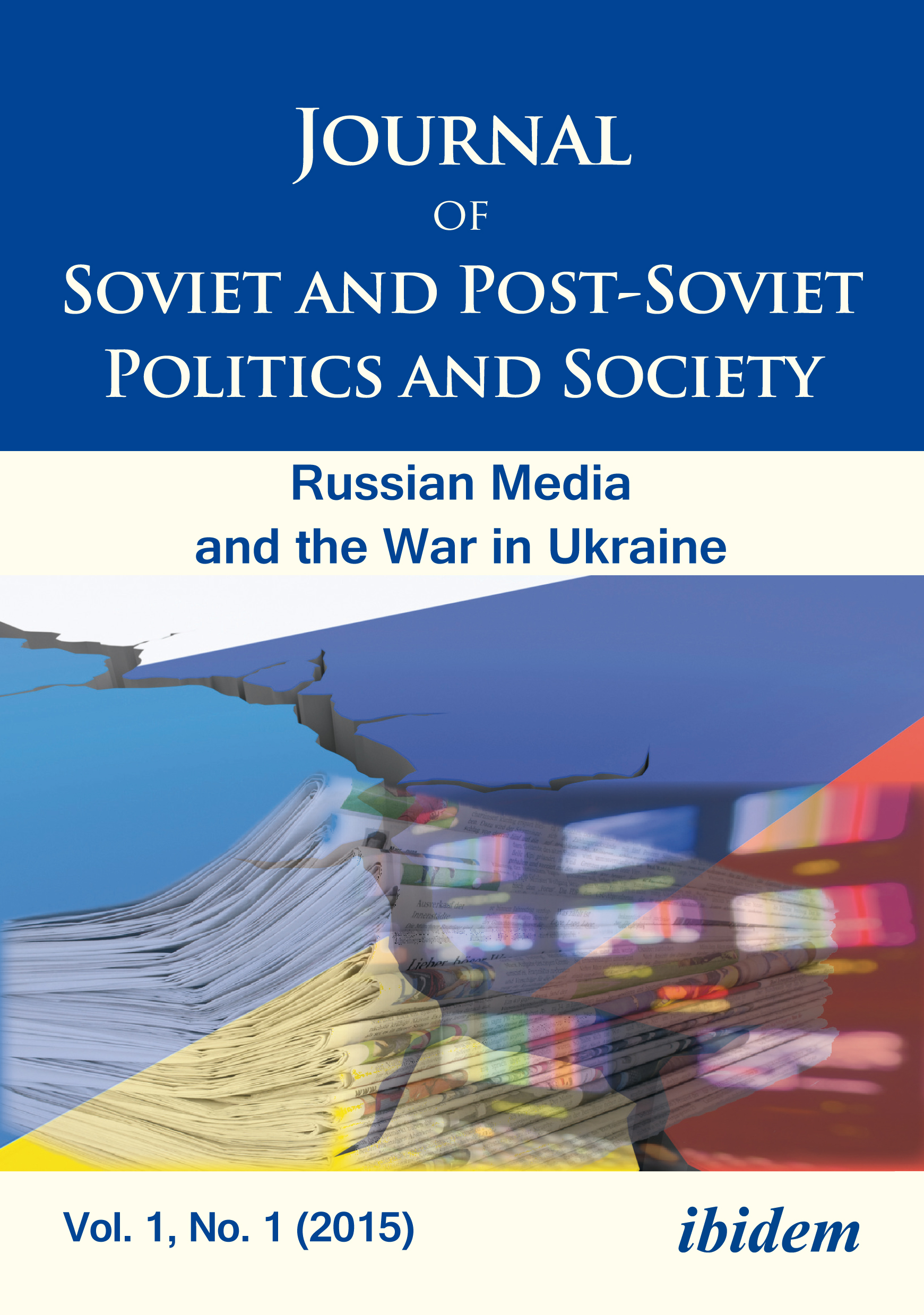 The Russian war in Ukraine has been accompanied, fuelled and legitimized by a Russian information war campaign that is unprecedented in its scope and nature. Increasingly lurid in form, sometimes surreal, the Russian state-media propaganda campaign has been surprisingly successful in disguising and distorting the nature of the war and shaping the way it is perceived and understood, both in Russia and beyond.
This special issue sets out to launch an interdisciplinary discussion on the Russian information warfare being waged in parallel with the military war in Ukraine.
How is the war being packaged and narrated for domestic and international audiences? How are these narratives being received in Russia and in the West? What new trends can be observed in the identification and construction of 'enemies'? How do we interpret and explain the imperial hysteria and hatred currently on display on Russian TV? What are the appropriate responses? How can we avoid the trap of allowing Kremlin propagandists to shape the terms and language in which the war is viewed?