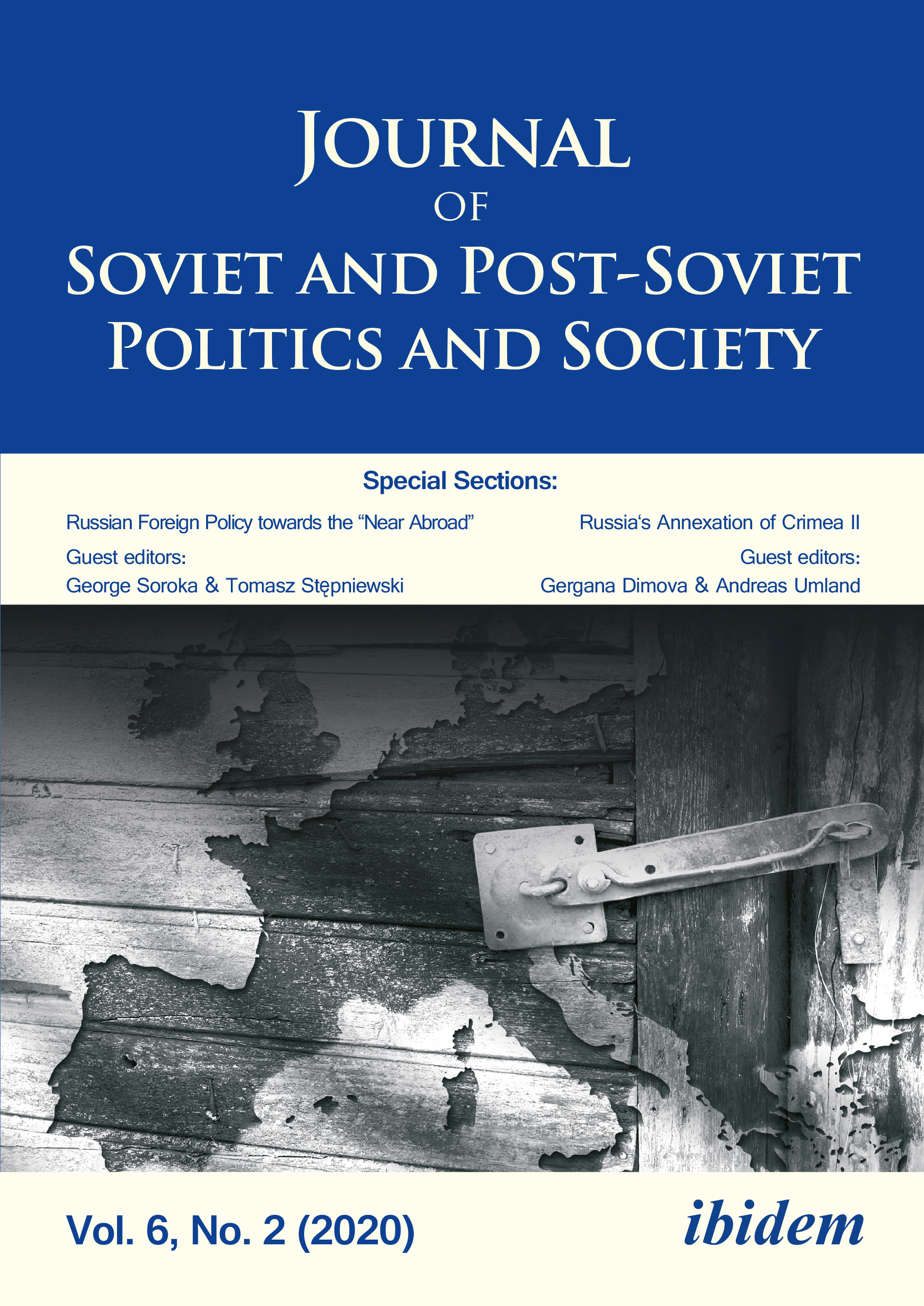 Special Section: Russian Foreign Policy Towards the “Near Abroad”

This special section deals with Russia’s post-Maidan foreign policy towards the so-called “near abroad,” or the former Soviet states. This is an important and timely topic, as Russia’s policy perspectives have changed dramatically since 2013/2014, as have those of its neighbors. The Kremlin today is paradoxically following an aggressive “realist” agenda that seeks to clearly delineate its sphere of influence in Europe and Eurasia while simultaneously attempting to promote “soft-power” and a historical-civilizational justification for its recent actions in Ukraine (and elsewhere). The result is an often perplexing amalgam of policy positions that are difficult to disentangle. The contributors to this special issue are all regional specialists based either in Europe or the United States.

JSPPS’s second special section on Russia’s annexation of Crimea is less focused on Moscow’s 2014 land grab per se. Instead it discusses how to interpret and contextualize some salient judicial, historical and political issues concerning the annexation. The section’s papers document how these issues have been interpreted and contextualized by various relevant public actors including politicians, journalists and scholars, in Ukraine, Russia and the West. Natalya Belitser’s “The Status of the Crimean Tatars in Ukrainian and International Law” shines new light on the long legal and political fight of the Crimean Tatars to acquire the special status of indigenous people. Alina Cherviatsova’s “The 1954 Transfer of Crimea: Debunking the Myth of a ‘Royal Gift’ to Ukraine” focuses on select Soviet legal and historical issues related to Moscow’s various apologetic discourses since 2014. Maryna Rabinovych’s “How the Federal Republic Reacted to Russia’s Annexation of Crimea: Berlin’s Diplomatic Response and German Media Representations in 2014-2020” portrays today’s Germany as caught in the middle of two of its fundamental competing foreign affairs principles, multilateralism and Ostpolitik, in the aftermath of Russia’s annexation of Crimea and intervention in the Donets Basin (Donbas). The three papers add new observations, comparisons, and interpretations to the growing body of academic literature, on Russia’s annexation of Crimea. They provide insights into hitherto insufficiently highlighted aspects of this consequential event in current European history.

Special Section: Russian Foreign Policy towards the “Near Abroad”

Yuval Weber: When War is Preferable to Peace: Russia, the Post-Cold War Settlement, and the Kremlin’s Policy towards Ukraine

Boris Barkanov: A Realist View from Moscow: Identity and Threat Perception in the Writings of Sergei A. Karaganov (2003–2019)

Natalya Belitser: The Status of the Crimean Tatars in Ukrainian and International Law

Alina Cherviatsova: The 1954 Transfer of Crimea: Debunking the Myth of a “Royal Gift” to Ukraine

Maryna Rabinovych: How the Federal Republic Reacted to Russia’s Annexation of Crimea: Berlin’s Diplomatic Response and German Media Representations in 2014–2020

Dennis Soltys: Democratic Centralization and Institutional Development in Ukraine from the Maidans of 2004 and 2014: A Holistic Interpretation

Nicolaas A. Kraft van Ermel on:

Paul Hanebrink, A Specter Haunting Europe: The Myth of Judeo-Bolshevism

Jean-François Caron (ed.), Kazakhstan and the Soviet Legacy: Between Continuity and Rupture